These notes are to support a talk entitled “Irish Catholic Church Records” by Dr Jim Ryan of Flyleaf Press at the ‘ Who Do You Think You Are Live’ show in Birmingham on Sat 18 Apr 2015.

Ireland has historically been a predominantly Catholic country. In 1861 78% of the Irish people were Catholic, and up to 95% in the provinces of Munster and Connaught . However, the earliest Catholic record is for 1670, and records are sparse until the early 19th century. Nevertheless Catholic Church records are the only evidence of most 18th and 19th century Irish people and they are a hugely important component of Irish genealogical information. To understand the records and their availability, it is useful to understand the history of Irish Catholics, and the political and social factors which affected record-keeping.

The Irish Catholic Church had a very well-developed infrastructure up until the 17th century. However, during this century religion and politics became intertwined in Ireland and Britain, and Catholic interests were finally defeated with the victory of William 1st in 1692. To ensure that a Catholic threat did not re-emerge, and to eliminate the Jacobite cause which had made claims to the English throne, the Catholic Church was severely repressed by the passing of the Penal Laws in the period 1698-1703. The Catholic church infrastructure was destroyed, priests were restricted in number and practices; and the Catholic laity were substantially impoverished and largely unable to contribute to Church upkeep. This very significantly affected the keeping of records. These laws were unsustainable, and they were gradually dismantled over the next 120 years or so allowing the church to resume record-keeping. As noted by the historian J.A.Froude “From the day the penal laws were passed, the government had been growing in embarrassment. They had hoped that the terrors of the threatened penalties would prove sufficient and…that when the existing generation of priests had died off, popery would come to a natural end. Had the laws been enforced in Ireland as they had in England the desired effect might have been produced. (However) ….In England popular sentiment was on the side of the law. In Ireland it was antagonistic. …the Government finding that they could not carry out the laws without violence, preferred for the most part to earn an idle popularity by affecting to hold them in suspense” .

As the Penal laws and associated anti-Catholic measures were dismantled, church administration improved, and record-keeping began. The major period of growth in record-keeping was the first few decades of the 19th century and by about 1820 about half of Irish parishes were keeping records. However, there is very clear regional variation in the extent and form of record-keeping. Major factors which determine whether and when individual parishes kept records include:
(i) Parish income: many parishes, particularly in rural areas, were impoverished and did not even have a church. Record-keeping was understandably not a priority for such parishes.
(2) Availability and level of education of priests: There was a severe shortage, and even absence of priests in many areas during the 1700s and there is evidence to suggest that some poorly educated priests were put in office to fill this gap. The ability to keep records was further affected by this.
(3) Parish and diocesan commitment to record-keeping: There was effectively no church administration above the parish level for much of the 1700s, and many problems faced the diocesan administrators when they began to rebuild their infrastructure. Some dioceses did not instruct their priests to keep records until well into the 1800s. Nevertheless, many priests did themselves begin the process without instruction.
(4) Attitude of the local administration: In some areas, local magistrates and landlords turned a blind eye to church practice, whereas in others there was rigid enforcement of the Penal Law provisions. This also affected the ability of some priests to run their parishes.

The result of all of this is that there is a low level of record-keeping during the 18th century. Overall, only about 14% of parishes kept records by 1800. However, there is big regional variation. In Leinster (SE Ireland), about 30% of parishes did so, whereas in Ulster (North) and Connaught (West) only about 3% kept records. There is also a major differentiation between rural and urban areas, with records commencing earlier in the urban areas. It was not until around 1840 that most parishes had records.
Marriage and baptism records were usually kept, but burial records were only maintained by about 20% of parishes, especially in Ulster. The baptismal records usefully state the mother’s maiden name, and addresses are sometimes provided. The records are kept in English or Latin. The latter are in ‘church Latin’ which is relatively easy to decipher with the aid of a short list of commonly used terms. The registers are available as follows:

On-line. Most records have been indexed by Heritage Centres which exist in almost all counties. The website www.rootsireland.ie can be searched for a specific name for a fee. A search of the original records can then be commissioned from the centre holding the records. Records for County Kerry, Dublin City and the Diocese of Cork and Ross have been made freely available at www.irishgenealogy.ie. If you are unsure where an ancestor came from, a general search for a name can be conducted on both sites.

Microfilm. Copies of all but a few registers are available on microfilm in the National Library of Ireland and also in the Mormon Library in Salt Lake City and are accessible to callers. The list of NLI registers can be seen at www.nli.ie/en/parish-register.aspx and the SLC records at http://familysearch.org/ . The NLI has announced its intention to put images of their entire collection of microfilms of Catholic Records on-line during the summer of 2015.

Original registers. Almost all original registers are in their parish of origin and accessible with permission of the priest. However, many priests will understandably take the view that their records are available on microfilm and on indexes and therefore be less willing to provide access to all callers.

A full account of the interesting background history to Irish Catholic record is in ‘Irish Church Records’ by Flyleaf Press. 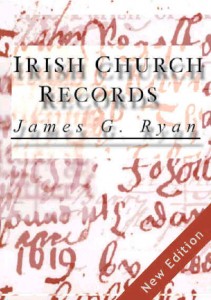