The following list is of 26 persons who purchased flax seed from the Monteagle estate in the Shanagolden area of county Limerick in 1808. It is from the correspondence of Stephen Edward Rice and the original is in the National Library of Ireland (NLI Ms 605A). The heading on the list states that 124 pottles of flax seed were sold to these persons at 1 shilling 7 pence halfpenny per pottle on 15th May 1808. These people would clearly have had access to land for planting and may have been tenants of the Monteagle estate. A pottle is an old measure of liquids equalling a half-gallon. Each purchaser bought from 2 to 7 pottles. Note that 8 of the purchasers are women. Many of the stages in the making of linen, particularly spinning, provided employment for women in the home. Growing of the flax would therefore have been of direct interest to women in the area. 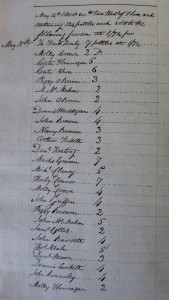